WellBeing by Well.ca | 7 Spices That Could Save Your Life (Literally!)
Seriously spice up your life with these herbs, roots and spices that will benefit your body just as much as they will impress your taste buds.
cardamom, cayenne, chili powder, cinnamon, curcumin, fennel, fenugreek, food, ginger, health, healthy, herbs, natural, nutrition, spices, turmeric
46712
bp-legacy,post-template-default,single,single-post,postid-46712,single-format-standard,qode-quick-links-1.0,ajax_fade,page_not_loaded,,qode-title-hidden,vss_responsive_adv,qode-content-sidebar-responsive,qode-child-theme-ver-1.0.0,qode-theme-ver-11.1,qode-theme-bridge,wpb-js-composer js-comp-ver-6.10.0,vc_responsive,no-js
Food, Wellness


7 Spices That Could Save Your Life (Literally!) 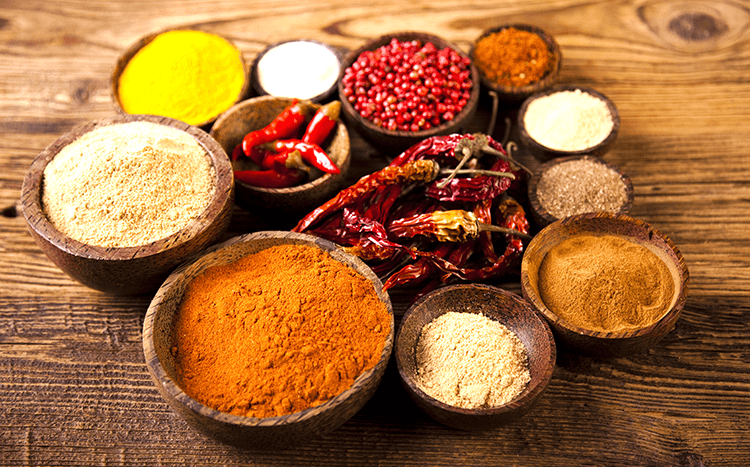 Herbs and spices are typically used to make a meal tastier (or even just prettier to look at), but they’re absolutely packed full of health benefits! Spice up your life with these herbs, roots, and plants that benefit your health as much as they do your taste buds. From keeping your heart healthy and your arteries clear to reducing pain and warding off cancer, these everyday flavors will add a healthy punch to your breakfasts, lunches and dinners. 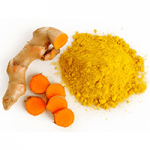 Modern medicine confirms some health benefits, most of which are associated with curcumin, a compound in turmeric that has potent antioxidant and anti-inflammatory properties. Curcumin has been shown to help relieve pain of arthritis, shingles and other injuries; it’s also being studied for its potential in managing heart disease, diabetes and Alzheimer’s. Research on curcumin’s potential as a cancer treatment has promise. Preliminary studies have found that it can inhibit tumor cell growth and suppress enzymes that activate carcinogens. 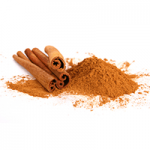 A few studies suggest that adding cinnamon to food—up to a teaspoon a day, might help people with type 2 diabetes better control their blood sugar, by lowering post-meal blood-sugar spikes. Consuming cinnamon has also been shown to lower blood pressure in people with diabetes (researchers also noted that cinnamon reduces systolic blood pressure in people without diabetes as well.) Cinnamon reduces the amount of circulating insulin, which may explain why it’s effective for those with diabetes. It was found that a half a teaspoon a day is enough to reduce your blood pressure levels. 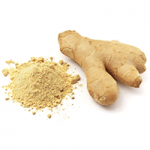 Chiles, which create sensations of heat, from mild to fiery, are especially prized in hot climates since the spice helps trigger the body’s natural cooling systems. Studies show that capsaicin—a pungent compound in hot chiles—increases the body’s metabolism and may boost fat burning. Capsaicin may also lower risk of ulcers by boosting the ability of stomach cells to resist infection by ulcer-causing bacteria and help the heart by keeping LDL cholesterol from turning into its more lethal, artery-clogging form. 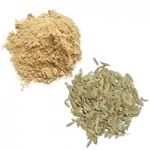 Fennel seeds have amino acids, calcium, essential fatty acids, iron, magnesium, manganese, phosphorus, potassium, selenium, thiamine, niacin, riboflavin and vitamins C and E. Fennel seeds may help prevent the formation of gas in the digestive tract by relaxing the intestines and you can chew the seeds to relieve bloating. 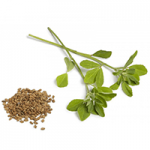 Due to its estrogen-like properties, fenugreek seeds have been found to help increase libido and lessen the effect of hot flashes and mood fluctuations that are common symptoms of menopause and PMS. In India and China it has also been used to treat arthritis, asthma, bronchitis, improve digestion, maintain a healthy metabolism, increase libido and male potency, cure skin problems (wounds, rashes and boils), treat sore throat, and cure acid reflux. Fenugreek also has a long history of use for the treatment of reproductive disorders, to induce labor, to treat hormonal disorders, to help with breast enlargement, and to reduce menstrual pain. Recent studies have shown that Fenugreek helps lower blood glucose and cholestrol levels, and may be an effective treatment for both type 1 and 2 diabetes. It is also being studied for its cardiovascular benefits. 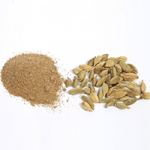 Green cardamom has a sweeter taste and is believed to have antioxidants and antimicrobial properties, as well as the ability to help with digestive issues. As an antioxidant, it may help to prevent heart disease and cancer. One study found that cardamom and black pepper may have a role in protecting the immune system. Other research showed that cardamom shows promise as a way to prevent skin cancer. Cardamom powder also has the potential to lower blood pressure.